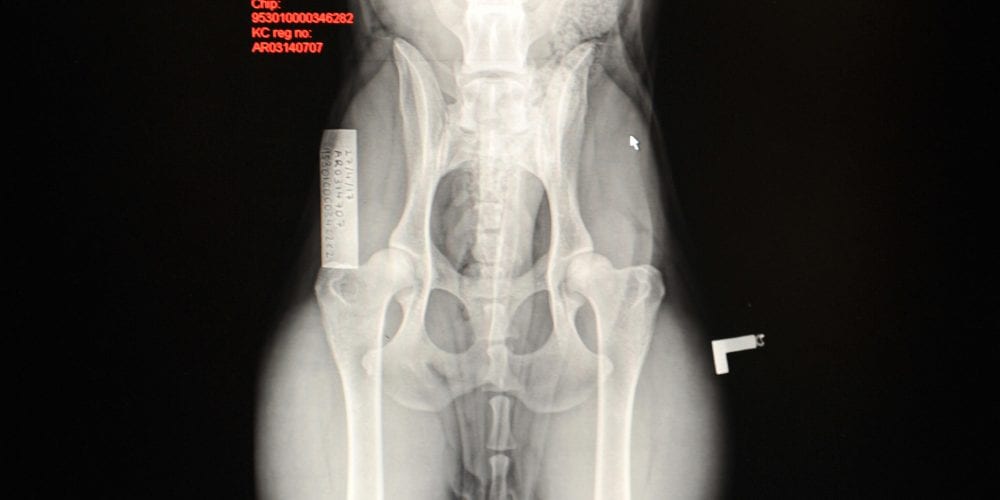 What is BVA Scoring?

Hip Dysplasia and Elbow Dysplasia are distinct joint diseases that affect a small but significant percentage of all breeds to a greater or lesser extent.

The larger breeds have historically been more afflicted with hip dysplasia than smaller breeds. The exact causes of these problems have not been fully elucidated but there appears to be a significant genetic/hereditary component.

At the current time, there is no easy test or DNA test to tell us which individuals are likely to pass this on to their offspring, despite efforts in this country, Spain and the USA to find marker genes.

The best we have is to check the state of the parents and avoid breeding from those individuals that are affected.

The main purpose of the scheme, therefore, is to examine radiographs of hips and elbows of dogs intended for breeding. At Hampton, Euan has been providing a hipe and elbow radiographic screening service for longer than we can remember! Breeders travel the length and breadth of the country for his opinion.

We use a rapid, efficient, reversible sedative combination to achieve excellent results and minimal hassle for the dog and the owner.

Q. Why do we have to X-ray? In this day of DNA testing and gene mapping, if this condition is largely genetic then why can we not determine affected and carrier dogs by gene tests rather than having to resort to X-rays?

A. This condition is not simply inherited from one gene but known to involve two or more genes which when present together will predispose a growing animal to have joint laxity which might progress to clinical Hip Dysplasia (HD). The exact combination of genes acing together to cause HD has not yet been elucidated but work is currently on-going (at VETGEN in the USA) to determine this. X-raying dogs with the legs extended behind is the only accurate way to show the degree of laxity or looseness in the hips which can be present in young dogs that otherwise appear quite sound.

Q. Can we X-ray dogs under the German A-Stamp scheme?

A. Since we have upgraded to a fully digital system, the German Hip Scheme cannot handle this format at present. This is likely to change but at time of writing this, we cannot offer A-Stamp submission.

Q. I have heard that poor diet or extremes of exercise can cause HD?

A. There is now plenty of scientific evidence to support the fact that “over-nutrition” and more rapid growth are responsible for the genetically predisposed dog to develop worse and earlier HD than might be the case on a restricted diet. There is absolutely no scientific evidence that over-exercising young dogs predisposes them to joint laxity or HD. It has been shown that muscle tone if fit, well exercised lean dogs can have some positive effect on the tightness of the joint capsule, as long as the exercise is maintained. It has no effect however on the genes so that a dog that is fit and lean until its skeleton has matured is just as dangerous to breed from as is his littermate who has reclined on a couch growing up.

Q. I have heard or read reports that other factors can cause HD, e.g. slippery floors, sunlight, Vitamin D, certain brands of dog food, Surely this must have some basis of truth?

A. There is no scientific basis for these “excuses” people have used. As stated above over-nutrition has been shown to affect the incidence and speed of onset of arthritis later in life but does not affect the laxity of the developing hip joints. For further information search the internet for any articles by Fred Lanting, probably the world’s most eminent and highly respected American specialist in this field.

Q. Why do dogs need to be sedated or anaesthetised in order to X-ray for HD testing?

A. In order to get good, sharp, symmetrical images we need our patient to have extremely relaxed muscles. This used to be only achievable with a general anaesthetic but can now be achieved with a combination of safe, modern sedative agents. This obviously greatly reduces risks that are always present with general anaesthesia. Furthermore, these can be chemically reversed when finished to ensure that dogs walk out after a stress-free procedure

Q. My bitch has just come into season and I have heard that this can affect the hip score?

A. Absolutely not! It is only during the birth process where circulating hormones can have a slackening effect on the pubic symphysis (where each half of the pelvis is joined together) and thus alter the angulation of the pelvis and thus the likely hip score. The hormone changes around oestrus have no effect on these bones.

Q. My dogs don’t suffer from hip dysplasia so I don’t need to have them x-rayed to breed from them.

A. It is not possible from movement or physical examination alone to tell how well the hips are located in their sockets. Just because a young adult dog moves well and has had no movement problems or lameness between 3-12 months does not mean that these dogs will end up with a better than the average score. I have seen many such young dogs that have ended up with a score of over 50!

Q. Do I have to wait until my dog is a year old before I have it X-rayed?

A. Yes and No !!! -Yes all dogs must be at least 12 months old before they can be officially scored under the BVA/KC Canine health scheme. -No- The earliest we can estimate with accuracy how good or otherwise the hips are going to be is from approx 5 months of age. At this stage, the skeleton is soft and still developing but the degree of laxity that exists from this age until adulthood is remarkably consistent unless some accident or injury befalls one hip.

Q What is the optimum age to get the best possible hip score from my dog/bitch?

A. Many breeders have their own opinions but the general consensus among canine orthopaedic specialists is that the best possible score is achievable as soon after 12 months as practicable. If a dog has got excellent hips, destined for a low single figure score then the timing of this x-ray will make little difference. (I have x-rayed 4 and 5 year old dogs with 0:0 hip scores). However, if the hips are average or worse than average then the score may be a few points higher several months later.

Q My breed is known to suffer from hip dysplasia so I don’t need to go to the effort and expense of also checking the elbows.

A. The incidence of clinical or severe hip dysplasia is definitely declining amongst the breeds that are most afflicted (German shepherd, Golden retriever, Labrador, Bernese mountain dog) and I am sure that the Canine Health Scheme can take most of the credit for this. Over the past 5 years, we have seen a great increase in elbow problems in young and old large or giant breeds. When investigated at least 75% are directly or indirectly related to elbow osteochondrosis of the elbow joint. This condition is thought to have a vaguely similar pathology to that of hip dysplasia. Furthermore, there is enough evidence to show that there is an inherited component in its development

For more information on hip and elbow scoring visit the Kennel Club Website.